This program flies in the face of the John Birch Society,  radical right-wing advocacy group that has chapters in all States. The recital adopts the title of the Beatles tune “Back in the USSR” from the White Album. This song caused an anti-Beatles conservative backlash in America, led by the John Birch Society which charged the group with encouraging communism. Conversely, “Back In The USSR” became a favourite song of The Beatles’ Russian fans, who heard it through tapes smuggled into the country. Flanked by two of the most celebrated Russian works of art (Mussorgsky and Prokofiev) the “Suite Fake Beatles” gives us reason to examine the influence of arrangements of the Beatles songs (where access to the actual songs were denied).

Mussorgsky
Pictures at an Exhibition

Suite “Fake” Beatles – which includes the following arrangements of the Beatles songs:
(see notes below)

Frederic Rzewski
Short Fantasy on “Give Peace a Chance”

James Tenney
Love me Do

Per Nørgård
Light of a night (Paul meets Bird) 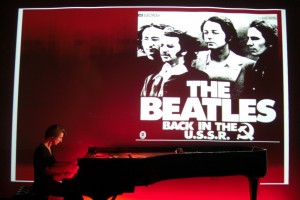 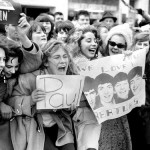 In 2012, as the world celebrated the 50th anniversary of the release of the Beatles’ first single, the slogan “Lennon lives” is as popular as in Soviet times, when schoolchildren chanted the old Communist slogan: “Lenin lived, Lenin lives, Lenin will live,” but replacing “Lenin” with “Lennon”.
“In the ballads of the Beatles we discovered more meaning than in all the articles by Lenin that we were made to read in school and at university,” wrote rock musician Aleksei Rybin.

Despite the misgivings of Soviet leaders about the Beatles, a rumour circulated that the Beatles had played at a private government concert in the USSR.

However, it’s more likely that, if there was a concert at all, it would have been performed by the Soviet tribute band Blitz (www.youtube.com/watch?v=H_QGv9qXbQ8) who hailed from the Soviet republic of Georgia. The group, which was approved by the authorities, were renowned for how well they sang Beatles songs in English and were said to have worked hard on their pronunciation. They mastered the haircuts, too.

“Of course, this was fake Beatles,” says Rybin, who attended a Blitz concert.

“But we all grew up on fake sausage, played fake guitars, studied fake history, bought records by fake singers with our fake money, and listened to the fake leader of our government on TV… So fake Beatles was far from the worst of it.”

The above text is published by Rossiyskaya Gazeta (Russia), by Alexander Bratersky, 08 Nov 2012.